On the Internet information about Srikhand Mahadev is scarce and scattered, therefore I decided to create a mini-guide about climbing this peak. There are total of three ways to get to the top:

I don’t have any information about the 2nd and 3rd way, so if you are interested, check the linked resources.

The peak and the yatra
Srikhand Mahadev (Sirikand Mahadev, Shrikhand Mahadev) for ages was considered to be the home of Shiva, an important god of hinduism. Therefore it attracts pilgrims from over India during the yatra (pilgrimage). Every year yatra lasts from middle June to the beginning of September, i.e. during the monsoon. The rivers are full of water, it is raining heavily, tracks are slippery, but the advantage is that even the higher parts are snow-free. During yatra, around 10,000 pilgrims visit the mountain. In that time locals cater well for the pilgrims. On the way, which off-yatra is totally uninhabited, every 20 minutes you can eat at food stalls, buy drinks, find accomodation in rented tent (200 rs/night).

Foreigners are rarely seen on this trek. The place is not mentioned in Lonely Planet, Rough Guide, etc., and the villagers in Batcha claimed that only around 5-10 foreigners visit the Sirikhand sanctuary annually.

How much time?
We met some guys in Rampur who say they do the hike in three days (in flip-flops!). Locals from the villages (Bacha, Jaon) can do it in two very long days. But take into the account the fact that as they live at 2000 m they are well-acclimatised. As I have some experience with the altitude and AMS I definitely would recommend at least 5 days of hiking – especially if you carry the luggage on your own and don’t use the porters. Reserve two days to reach Bhimdwari/Nain Sarovar; one day to hike to the top; and one very long day to get back to the paved road. The surroundings are splendid so spending more time wouldn’t be a problem.

Geography and getting there
Even the famous Lonely Planet has a mistake connected with Srikhand. In ‚India’ guidebook on the map of Himachal Pradesh the peak of Sirikand Mahadev is marked south of Rampur, near Sarahan. In reality, Srikhand is north of Rampur, and north of Nirmand (see the map). Explanation of this error: Sirikand Mahadev is near Sarahan, but in the vicinity of Rampur there are two Sarahans. One is famous for the temples (and is south of Rampur, as marked on LP map), the other one is not widely known (and is north of it).

The trek starts in a village of Bagi Pul. There are about 8 buses daily from Rampur to Bagi Pul (2 hours, 35 rupees), all in the morning and early afternoon. The last bus from Rampur leaves around 1:30 pm, and is simultaneously the last bus from Bagi Pul to Rampur (leaving around 3:30 pm). Bagi Pul is a trade centre for local villages, so it is possible to buy some food there or eat dhal bhat at a simple dhabba (village bar).

It is possible to trek from Rampur to Bagi Pul via Arsu. I expect it would take 6 to 8 hours, but have no idea where the way starts in Rampur. The trek should be very steep, leading through small settlements, and probably can provide you with better acclimatisation.

The trek
The first hours lead through the Sutley Valley. From Bagi Pul you should walk to Jaon (6 km, 1,5 hrs). The road to Jaon can be covered in a jeep for around 50 rs per person, but during our visit (just after the monsoon) the road was blocked by landslides. Probably it is repaired every year after the rain ends. Jaon is the last place with shops open all-year-round, but offering very limited provisions. 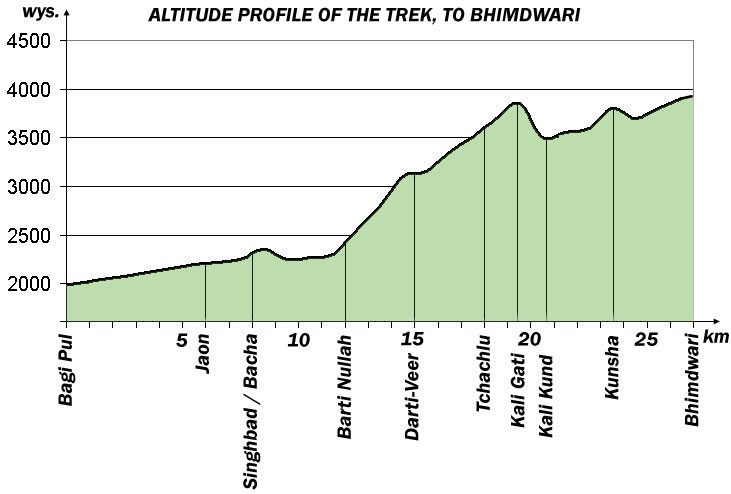 From Jaon it takes 1 hour to get to the tiny settlement of Singhbad / Bacha village (Bacha are the houses on the other side of the river). A couple of hundred metres later there is a Hindu temple, and the so called ‚Forest Guest House’, offering accomodation (but closed after the yatra ends). The trail leads a little uphill, traversing the slope. 1 hour and 3 kilometres later you reach Barti-Nullah, a place consisting of a very small temple and a bridge.

Barti-Nullah marks the beginning of a [u]very, very[/u] steep uphill walk (local name: ‚the vertical climb’), up to the top of Kali Gati (3800 m). On the way along the path there is absolutely no water. It is recommended to split the climb into 2 parts, by staying overnight in Tchachlu (consisting of one abandoned house). It will help you acclimatising. From Barti-Nullah Tchachlu can be reached in 4-5 hours of a very demanding hike. You can find a tiny spring about 15 minutes’ walk from the house, but the place is well-hidden, so ask the locals. Yet, there is plenty of wood so making a campfire is easy.

It takes further 1-1,5 hour from Tchachlu to climb to Kali Gati (3800 m), near the top of the mountain. If the weather is good expect wonderful views. From Kali Gati you have to descend 300 m to Kali Kund (again one ramshackle house). Kali Kund has good supply of water and some wood available.

Next three hours to Bhimdwari are really frustrating, including lots of ups and downs, traversing a gigantic slope of one of the mountains. Most probably you’ll do it in the hot afternoon sun, which will make it even more frustrating. Most pilgrims stop at Bhimdwari overnight. There is no wood (we found some leftovers, but on this altitude it is really hard to sustain fire and boil water), so I recommend taking a cooking stove. During yatra, ask around whether there are tents for rent also in Nain Sarovar (4400m, 500 m uphill, 3 hours). Nain Sarovar is a small lake, considered holy, and is on the way to the top.

Most pilgrims cover the top ascent from Bhimdwari, but it is around 16 very long hours (you need to get up at 4 am the latest). If you decide to stay in Nain Sarovar, you raise the chances to get on top by saving 3 hours (4,5 hours both ways).

We did the trek in the end of September. The locals discouraged us heavily from going on the top, saying it is impossible and dangerous (for an average trekker). I had a good look from Bhimdwari though, and think they were exaggerating a little. It is possible to do the climb, but remember about safety: 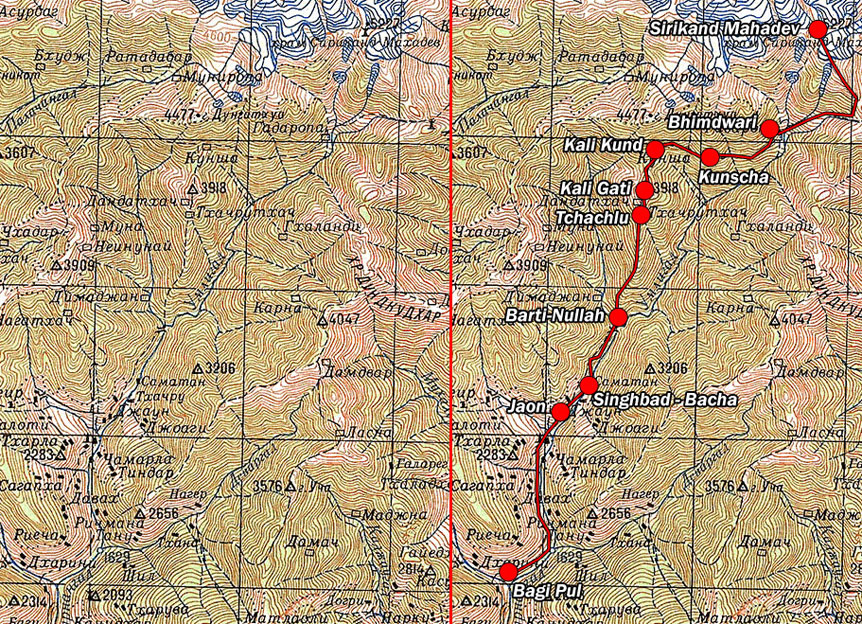 Porters:
If you don’t feel like carrying all your things on high altitudes, it is advisable to hire a porter. Expect to pay 200-350 rs a day (Indians pay 200 rs, but if you are a foreigner you’ll be charged more). Hire a porter in Jaon or Singhbad/Bacha. We hired one porter for four of us, but finding a guy who can speak any English is tricky. If you want, you can contact ours: Dinanath Thakur, 0-941-830-56-43. The guy was really nice and reliable and later invited us to his home in Bacha, so we spend the whole day with his family observing village life. A unique expierience!